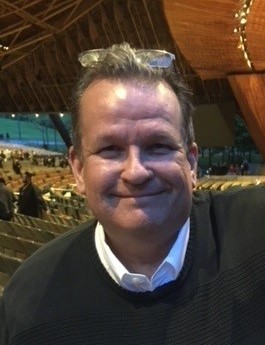 It is with heavy hearts that the family of Phillip James Egan announce his passing on November 25, 2021 at his home in Cuyahoga Falls. He was born October 9, 1952 in Chicago Heights and was the first of eleven children.
He attended Marion Catholic High School where he was a member of the track team and held many school records. After graduation he attended Marquette University and majored in marketing. While at Marquette, he made friends who were with him throughout his life. After graduation, Phil worked for Kraft Foods for a few years. Then Phil had an opportunity to move up to a better position selling medical supplies with Time Med. Eventually, Phil followed his father's footsteps, and joined Mactac in a sales position in Chicago His success brought him to Ohio, as a product manager in 1993.
While he was in Ohio working, he met his future wife, Devon Schubert, in 1995, and they were married several years later. In 2000, they became the proud parents of Pierce John, and he is their greatest love. Above all, Phil thrived on constantly learning and having new experiences. He loved to engage people in conversation, and because of his quick wit the conversation was always riddled with laughter. Because of his love of coffee and conversation, and the many hours he spent at Starbucks, his friends were starting to believe he had unending shares of stock in the company. Phil had a love of helping others volunteering as a court appointed advocate for children and donating platelets to help those in need. The days we had him in our life were all too short, and he will be greatly missed.
He was preceded in death by father, Phillip L. Egan; he is survived by mother, Patricia Egan; son, Pierce J. Egan; Devon Egan (former wife); siblings, John (Madonna), Barry (Kathleen), Cris Esposito Tregoning, Mike (Nancy), Dennis (Pat), Bernie (Heather), Mary (Chuck) Lynch, Danny (Joyce), Anna (Eric) Piper and Chris (Jaramy) Clay and many nieces and nephews.
Calling hours will be Friday, December 10, 4-7pm at the Hummel Funeral Home, 500 E. Exchange St. Akron, Ohio 44304. Funeral service will be 11:00am Saturday, December 11 at the funeral home. Private interment at Chestnut Hill Memorial Park at a later date. In memory of Phillip Egan, in lieu of flowers, memorial contributions may be made to the American Heart Association or St. Judes Research Hospital.

To order memorial trees or send flowers to the family in memory of Phillip Egan, please visit our flower store.