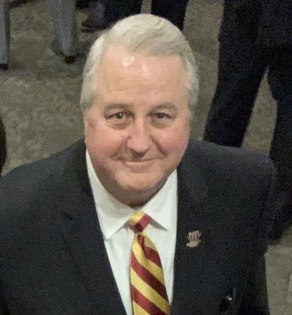 Mark's Final Playbill Mark Alan Matthew Heffernan made his debut in Cleveland, Ohio on June 17, 1959. He grew up in Maple Heights with his "high flying adored" parents, William and Laverne Heffernan. His featured ensemble of siblings includes Christy Sperry (Steve), Bill Heffernan (Lisa), and Patty Langlois (Jeff). One of his first roles was a "Firebird" at St. Peter Chanel High School where he played basketball for his favorite coach, Joe Lynch. He performed in several school musicals here, including his role as Riff in West Side Story his senior year. Mark continued to show his support for the Chanel Theatre Department by helping organize several "One Night Only" fundraisers, where he would sing onstage with other talented alumni. Next, he starred as a "Fighting Quaker" at Wilmington College where he studied acting and art education. He went to school determined to play basketball and ended up loving playing onstage to an audience instead. While there, he found a lifelong mentor in Hugh Heiland, who was the theatrical director at the college. Some of Mark's favorite productions there included One Flew Over the Cuckoo's Nest (McMurphy) and Company (Bobby). During college, he made his professional acting debut in The Pride of Jesse Hallam, a CBS made-for-TV film starring Johnny Cash. After graduating, he performed professionally with the Virginia Stage Company, The Cleveland Playhouse, and at Cain Park. Later in life, he continued to shine his light onstage at Berea Summer Theatre where he captivated audiences in shows like Evita (Che). At Canton Players Guild, the role he will most undoubtedly be remembered for is Jesus in Jesus Christ Superstar. He made many lasting friendships at The Beck Center where he performed in shows such as Hairspray and Spamalot. His personal favorite theatrical experience took place at this theater in 2010, where he portrayed the role of Max Bialystock in The Producers, alongside an exceptional company he adored. Mark's daughter, Hallie, carries his theatrical gene. He worked summers at Sea World as an emcee for the dive and ski shows. His time working for the Cleveland Cavaliers fulfilled his passion and love for basketball. He was the Entertainment Director during the era of Mark Price, Larry Nance and Brad Daugherty. While auditioning members for the Cavs Dance Team, he met his leading lady who eventually became his co-star for life. After fourteen years with the Cavs, he became involved in video production with Fox Sports Ohio and Fox 8 News. His team at Fox earned a local Emmy Award for Fast Break, a television show about The Cavs. This project gave him the great pleasure of collaborating with respected colleague and friend, Michael Stanley of MSB. For the past ten years, Mark has acted as the Manager of Athletic Affairs at Walsh University. He proved himself to be ‘The Greatest Showman' at the university by also directing all of the plays and musicals, emceeing all basketball games, managing media relations and conducting game day entertainment for the students. Working at Walsh gave him the opportunity to ignite his artistic side and passion for sports. He had the ultimate pride for his favorite Walsh Cavalier, student and son Spencer. Mark played many impeccable roles on and off the stage throughout the course of his life. Undoubtedly, though, his two most iconic and prominent parts he played were husband and father. His talents and passion for life will forever shine through his bride Amy, their children Hallie and Spencer, and their fluffy dog, Piper. His friends and neighbors will always cherish the memories of The Groundhog Cake™️, sidewalk chalk art, Easter egg and pumpkin decorations, Miller South performances, his secret popcorn-making methods, his radiant presence on Treetop Drive, and his ability to bring light and impeccable comedic timing into any situation. "Think of me, think of me fondly when we've said goodbye. Remember me, once in a while, please promise me you'll try. When you find that once again you long to take your heart back and be free; if you ever find a moment, spare a thought for me" (Phantom of the Opera). Let's all applaud Mark as he takes his final bow.

To order memorial trees or send flowers to the family in memory of Mr. Mark Heffernan, please visit our flower store.