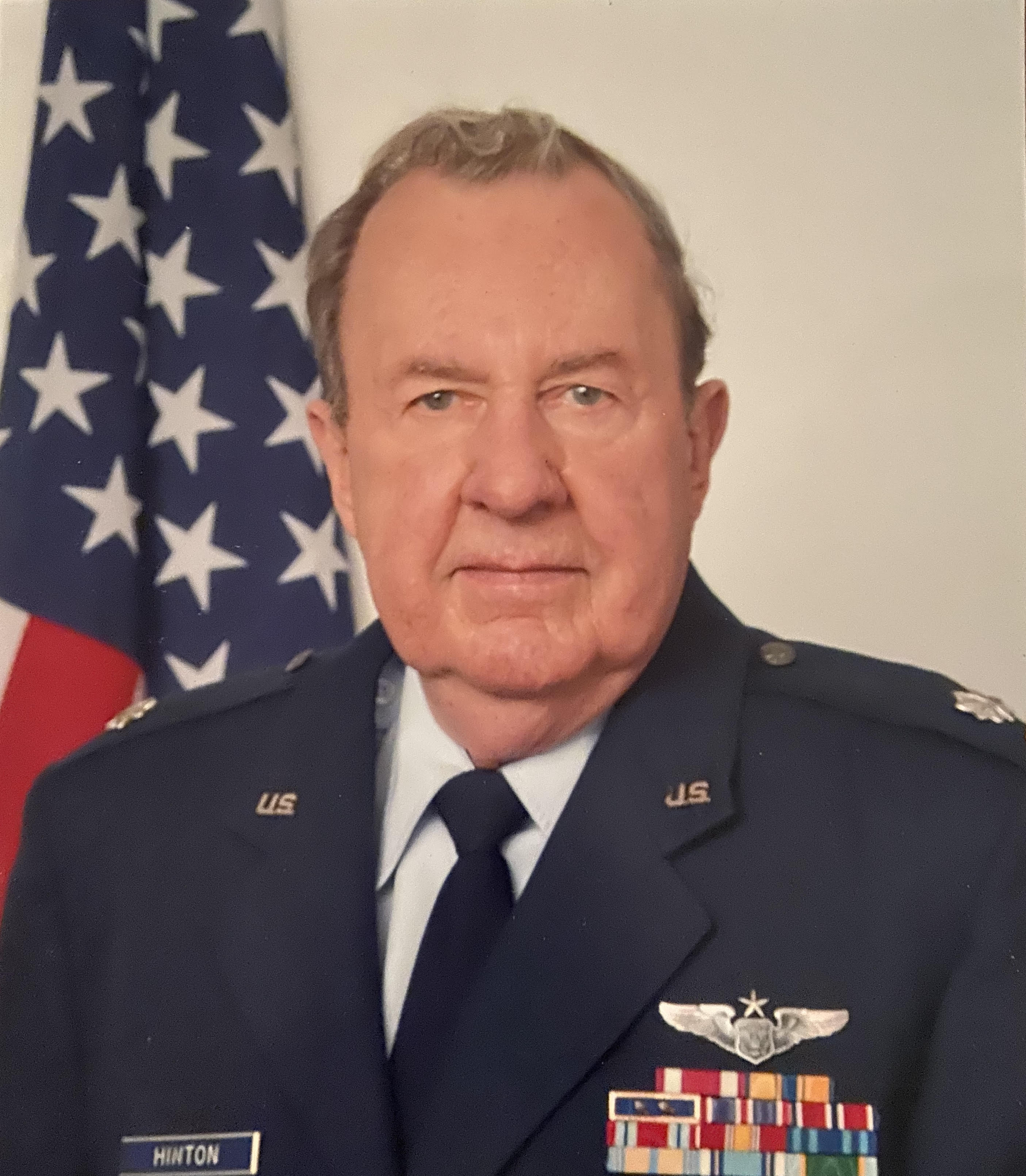 Our adored Lt. Colonel James Reiter Hinton took his last flight to heaven on October 23, 2020 at the age of 88. Jim was preceded in death by his parents James Melbourne Hinton and Alma Reiter Hinton, and his brother Jere Hinton (wife Molly) Jim was the oldest of four children. Jim is survived by his brother, Ralph (Betty) Hinton resides in Florida, and his sister, Carol (Robert Mouck) resides in Ontario Canada. Jim is also survived by his four beloved children: Deborah Sloan (Doug), Christina Hinton, James H. Hinton, Colleen Hinton-Hanson, and his five grandchildren whom he adored: Riley Hanson, Brian Sloan, Ben Sloan, Nicole Hinton, and Jack Hinton. His family was the center of his life, along with his dear departed dogs Cody and Woo, his faithful companions, and his surviving dog Foxy. Jim was born on September 22, 1932 in Akron, Ohio (he was "New" as he would say every year on his birthday). He grew up on the family farm in Copley, Ohio, graduating from Copley High School as quarterback and captain of the football team, and was inducted into the Copley High School Athletic Hall of Fame. He also won "best hair" in his senior class; something he was proud of all his life. He continued playing football at Ohio Wesleyan University and was also a member of the Sigma Chi Fraternity. Jim focused on academics, graduated with honors as a Juris Doctor from The Ohio State University College of Law, was elected to the Order of the Coif, and was a member of the Phi Alpha Delta Law fraternity, as well as the ROTC. Upon graduation in 1956, Jim enlisted in the Air Force as a First Lieutenant and entered flight training, flying C-130s. He was faced with the difficult decision to either continue his military career as an aviator, or as an attorney. He joined the US Attorney General's office in Washington DC and began an illustrious law career as part of the Judge Advocate General Corps, and in civilian life. His superiors considered him an expert on Military Justice. As a reservist, he was called upon to assist JAG officers and was appointed to the Selective Service Department during the Vietnam War. He retired from the Air Force in 1982 as a Lieutenant Colonel, receiving many accolades. Jim also served as Chairman of the American Red Cross – Military Service Committee, where he volunteered helping veteran families, especially those returning from Vietnam – including the fallen, the injured, and prisoners of war. Jim joined his father's private practice in Akron, Ohio and was known to be one of the best trial attorneys in the area. During his 50 year career he tried many types of cases. He was a voracious researcher that could take on a variety of legal issues, including wrongful death, criminal, personal injury, corporate law, medical malpractice, and more. His cases led him all the way to the United States Supreme Court, yet he was always willing to help with smaller personal situations too. Raised Baptist and becoming a Catholic as an adult, Jim's faith in God has always been steadfast. He served on the school board of St. Hilary in Fairlawn, and was a member of the St. Victor Parish in Richfield where he served as a lector and Eucharistic minister. He was also integral in the establishment of the St. Victor Parish Foundation, a non-profit organization to benefit present and future generations of the Parish. Jim loved animals. He had several four-legged companions: Nikki, Woo, Cody, and Foxy to name a few. Besides dogs, at one time or another he also had cats, a goat, pony, llama, and a sheep. One of Jim's favorite hobbies was photography. He has dozens of photo albums, scrapbooks, and hundreds of videos. He created his own studio in his basement for portraits, and would turn his laundry room into a darkroom to develop his own pictures. He was passionate about fitness, lifting weights into his 80's. He was also a "do it yourself" kind of guy. He dug an 18'x 36' indoor swimming pool by hand, and finished his basement with an area that served as his home office, gym, portrait studio, and entertainment area complete with a bar and pool table. He loved attending events for his children & grandchildren. If dad wasn't coaching football or baseball, he would be capturing videos of the performances, events, and sports. Known to his five grandchildren as "Gaga" or "Maav", they always had a special place in his heart and became what he loved most in life. Dad’s legacy will live on in his children and grandchildren; he touched many lives, of whom became extensions of his own family. We thank the entire staff of Renaissance of Richfield and Kindred Hospice for the love and care they generously gave our "Colonel" over the last few years. You also became family to us. Calling Hours will be Thursday, October 29th, 5pm-7pm at Hummel Funeral Home, 3475 Copley Rd. Copley. Masks and social distancing required. A Catholic Mass for the immediate family at St. Victor Church, Friday, October 30th at 11am and will be live streamed at www.SaintVictorParish.org. Burial Service will commence at 12:30pm at Ohio Western Reserve National Cemetery. Donations may be made to the American Red Cross – Services to the Armed Forces at www.RedCross.org/donate/help-military-families, and the Summit County Humane Society www.SummitHumane.org.

To order memorial trees or send flowers to the family in memory of Lt. Hinton, please visit our flower store.