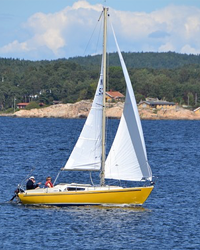 Henry C. Young, Jr., 85, of Akron, passed away Friday, February 12, 2021.   Henry was born to the late Henry C. Young and Mildred D. Young of Marshall, Missouri.  He is survived by a brother, John (Diana) Young, of Benton, Arkansas, a niece, Robin (Jay) Bray, of Benton, and a great-nephew, Justin Bray, also of Benton.
Henry attended Marshall High School in Missouri and graduated from MIT, where he was a member of Beta Theta Pi fraternity. He received his J.D. from the University of Akron School of Law, specializing in patent law. He worked for Goodyear for 63 years, first as a chemical engineer and later as a patent attorney, before retiring in 2019.
Henry loved sailing. He was a member of the Portage Lakes Yacht Club and served as Commodore in 1973. He was a 50 year member of the Akron Sail and Power Squadron and sailed to many ports of call over the years. He was an avid cyclist as well, and enjoyed volunteering for local events in his later years. Henry enjoyed any type of travel, whether locally or globally, with his close friends.
Henry’s greatest passion was managing the Young-Martin farm in Missouri, keeping meticulous records, and planning, with great gusto, all of the family gatherings there.
By Henry’s request and due to Covid 19, no service will be held. In lieu of customary remembrances, the family requests that memorial contributions be directed to the Akron Community Foundation, Henry C. Young Fund, 345  W. Cedar St, Akron, OH 44307.

To order memorial trees or send flowers to the family in memory of Henry Young, please visit our flower store.