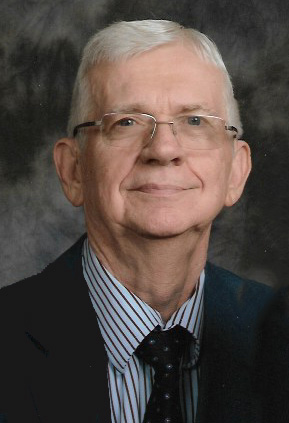 He was born January 14, 1943 to Leo and Genevieve Frank in Summerhill, PA.  Working as a Pennsylvania coal miner, “Lee” needed help when he lost Gen with five little ones.  The siblings each went to live with various aunts and uncles but stayed close in the Summerhill area.  Gene, or “Pooge” as he was later known, went to live with first his maternal grandparents, then Aunt Rita and Earl Dierling and their three children: Suzie Dierling Thomas, Ed “Diz” Dierling and Joyce Dierling Cobaugh.

After high school he served four years as a bomb nav systems mechanic (SAC) at Wurtsmith AFB, MI, in the US Air Force. When he returned home, he used the GI Bill to graduate from St. Francis University, Loretto, PA.  His degree in Chemistry brought him to Akron where he worked 32 combined years as a Chemist Compounder at Firestone then General Tire (which became Continental General Tire).  He worked in Tire Development before being selected for a prestigious position on the Corporate Tech Group in manufacturing administration.  It included travel to all the plants including Canada, Germany, Argentina, and Mexico.  He became Plant Chemist at the Charlotte facility in 1994.  He was awarded the 1999 Corporate Quality Recognition Award.  After 2003 retirement they moved to Weaverville, NC. but later moved to Barberton to be closer to family.

After a nine-year courtship, Gene married the former Barbara Irene Hellwig in 1990.  They met through New Leaf, a singles catholic group.  When they later went for pre-cana counseling, the pastor was amazed that he did not have to untangle any pasts for the two unmarried mid-40 singles sitting in front of him.

Together they enjoyed traveling coast to coast and north to south usually visiting family and friends but never outstaying their welcome.  Shrine visits were added in later years.  He participated in bowling leagues up until 2017.  Golf, gardening, yard work and occasional fishing were enjoyed together.  He loved cars, driving and current events.  Over the years he owned too many cars to count, mostly fast and sporty and always two at once.  He was admired by many of the nephews for his choices in vehicles.  Early in the courtship, before he made the first car payment on his new Audi 5000, Barbara was driving when a deer tried unsuccessfully to jump the car.  Gene was torn between asking how the girls were and crying about his new car.  He would have never forgiven any other driver.

Throughout his life he maintained a vibrant catholic faith. He was committed to a daily  Our Father, for anyone in the extended family that needed it.  Even when his aphasia impeded, he insisted on saying grace before meals.  He loved singing in church and home, saying the Divine Mercy Chaplet, rosaries, and novenas.  Even before his hearing started to fail, he wanted to sit up front in all the churches as he moved from Canal Fulton, to Rock Hill, SC to Weaverville then to Barberton.  He remained involved in all these parishes’ liturgical small discussion groups even to “attend” on zoom in recent months.  Gene never understood being too sick to attend Saturday evening Mass and always tried to arrive a half hour before Mass to study the readings of the day.  YouTube and mid-week Masses meant a lot during this past year.  Even under hospice care he was driven to get out of bed for church.  Turning on daily Mass calmed him completely.

Gene was diagnosed with Frontotemporal Dementia (FTD) 10 years ago, but his memory remained remarkable.  The family is grateful to the neurologists for this more accurate diagnosis when Alzheimer’s just did not fit.  Unfortunately, it robbed him of critical thinking, decision making and balance.  With much determination, work, and loving support of Barbara he remained interested in focusing on conversations, reading Bloomberg, watching tv, and maintaining his daily life.  Barbara became his voice, his most ardent supporter and advocate.

Out of the blue, metastatic cancer took his life sooner than anticipated, a mere 25 days after diagnosis.  After receiving the diagnosis over the phone, Barbara went to the hospital and explained to him that he had extensive cancer in several vital organs that the doctors could not cure, stop, chase, or treat.  That only God  knows the length of our days.  That he would go home with hospice support that night.  Gene received this news with grace and courage.  We found something to enjoy every day that God gave him.  He was frustrated to not get out of bed even to his final days he never lost hope to stand.

He was predeceased by his parents, brothers Don Frank and Jerry Frank, cousin Suzie Thomas, brother-in-law Bob Braniff, and many beloved aunts, uncles and cousins.

We are indebtedly grateful for the many wonderful people who have supported Gene over the years.  From family, friends, neighbors, the VA, doctors and nurses, he was always approached with compassion, kindness, and true enjoyment.  In the past several months zoom meetings were enjoyed.  We extend special thanks to Louise Hellwig who moved in and gave daily nursing care.  Lifetime neighbor and friend Kathy Meyer and Homestead Hospice care team were invaluable.

A Funeral Mass will be held 11 a.m. on Tuesday, January 19, 2021, at St. Francis de Sales Roman Catholic Church, 4019 Manchester Rd, Akron, OH 44319.  Family and friends may call at the church for an hour preceding the service. Masks and social distancing will be followed.  The service will be broadcast on YouTube under St. Francis de Sales Akron. To view the memorial mass click here. Burial with military honors will take place at Holy Cross Cemetery, Akron, OH.

In lieu of flowers perform an act of kindness in your community.  Donations may be made to your favorite charity.

To order memorial trees or send flowers to the family in memory of Eugene Frank, please visit our flower store.