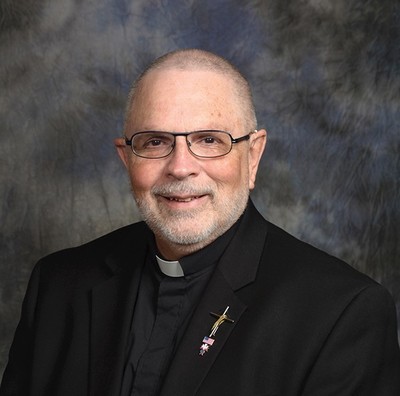 Deacon Dennis L. Smith, 74, passed away Friday, January 8, 2021.
He was born in Elyria to Joseph and Hilda Smith and has lived in the Akron area since 1973. Deacon received his B.S. in Education from Kent State University. He was ordained a deacon for service to the Diocese of Cleveland on May 22, 1993 and served nine years at Immaculate Conception in Kenmore. He has been at Nativity of the Lord Jesus Catholic Church since August 2002. He has worked with liturgical ministers, was Director of Music and RCIA for nine years. He was an active contributor to the Prayer Shawl Ministry. Deacon is also a member of Knights of Columbus Council #4644, Victor J. Paul 4th Degree Assembly #1768, the Ancient Order of Hibernians and a volunteer at Akron Children's Hospital.
Deacon Dennis was preceded in death by his parents and is survived by his wife Virginia whom he married on June 16, 1973; son Douglas; two grandchildren; four great grandchildren; brothers Tim (Bobbi), Roman (Kim), Richard (Terri), Marvin (Carol) and Gerald.
Vespers will be held Thursday, January 14, 2021, 3:00 pm at Nativity of the Lord Jesus Catholic Church, 2425 Myersville Rd., Akron where visitation will continue until 6:00 pm. Bishop Roger Gries will preside and Deacon Bob Bender will by the homilist. Mass of Christian Burial will be held Friday 11:00 am at the church where the family will receive friends from 10:00am until the time of service. Bishop Edward C. Malesic will be the main celebrant and Deacon Ray Daull will be the homilist. Interment Holy Cross Cemetery. In lieu of flowers, donations may be made to Akron Children's Hospital.

To order memorial trees or send flowers to the family in memory of Dennis Smith, please visit our flower store.